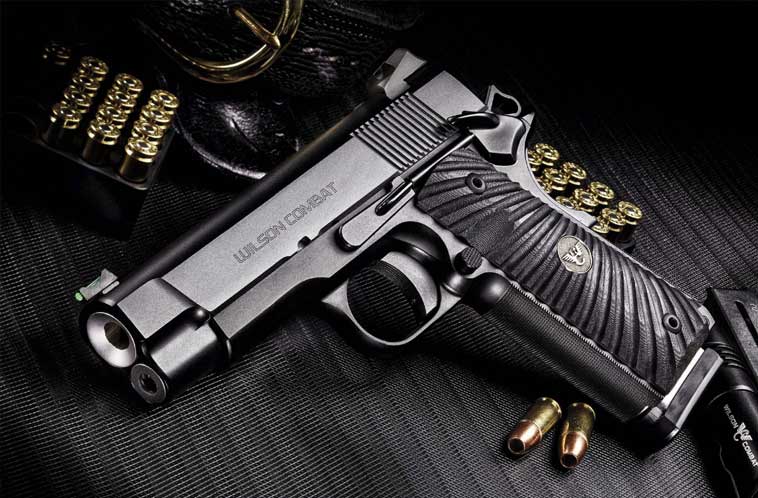 We will look at some of the best 1911 models out there, John Moses Browning's design is iconic, any gun person can tell that it's a 911 at a glance. There weren't many models before but now there have been changes,  currently there are new features and more calibers to choose from attracting more shooters.

First a little history lesson, this will be relevant later on and i will not bore you with too many details.  It all started with John Moses Browning wanting to supply the military with a more powerful handgun round.  He was not alone in the endeavor, he had to compete against other well-known gun manufacturers such as Smith and Wesson and Savage, then the U.S military adopted this gun, the 1911 as their sidearm of choice for very good reason.

The 1911 and other contenders were put through multiple endurance tests to simulate the environment on the battlefield, they were used to shoot 6000 rounds submerged in acid mud etc.  One of the tests involved shooting the gun with deformed cartridges, the 1911 passed all of these with flying colors at the turn of the century the us military wanted something more powerful than the 38 long colt that they had used until then.  The good idea that the new gun should chamber a 45 caliber bullet and the 1911 serves as the perfect replacement as it chambers the 45 automatic.  It uses a 230 grain projectile which can reach the speed of 850 feet per second,  from a self-defense perspective it is more potent round than the 38 long colt, certain pursuits may claim that any 911 not produced by colt is fake.  Now i'm not going to denounce their love for the original 1911, from a performance perspective they work just the same. Moreover it's not like colt wanted to outsource their production to other companies, it was a necessity because they needed to keep up with the demand.  You don't have to worry about quality either since many reputable gun manufacturers helped with the production such as Springfield Armorym Remington rand etc.

Nowadays you can still see the 1911 being used by some military units in law enforcement and it's still a viable self-defense firearm regardless of the manufacturing caliber,  ask any gun enthusiast and they will say that they have at least one 1911 in their collection.  Again the 1911 just works, it is reliable accurate and looks fantastic, there isn't much to hate about this gun.

In fact many major shooting sports have a special class for 1911 pistols even if the original model is over a century old, needless to say the 1911 is here and it is here to stay.  But that's enough history lesson, i'll give you a list of 1911 pistols in various price ranges, starting from the most expensive to the least expensive you can decide which one to buy.

Best in any price range If you can afford it i recommend going to the Colt Gold Cup 45 ACP or the Colt XSE Government.  As you will see the further down the list people will have something to complain about gun manufacturers except for Colt, the only thing people will complain about colts 1911s is the price, buying a cold 1911 is totally worth the money and you can find many models between $800 to $900. The reason is that the colts in 1911 retain their value very well, this is expected from a gun, this reliable iconic and sleek,  gold is one of the few gun manufacturers that can sell you a handgun that is older than you, it will last you a lifetime.

You see many 1911s in this price range here you can see all the elegant designs with all the bells and whistles. The only 9mm that is better than this one is the STI Trojan but it is discontinued, so the best option is the Springfield Range Officer.

At this price range you're getting a very potent and reliable gun, it is accurate and comes with all the features you want, the rugged forged frame and slide means that this pistol will last you a lifetime. The gun is also very pleasing to the eyes with its gorgeous and classic style.

The Wilson Combat CQB is as slick as it is expensive at a whopping $3100 at the moment of writing.  Gun builders who have a lot of money to spare will always go for Wilson parts since they are some of the best money can buy.  I recommend the The Wilson Combat CQB for this very reason since every part of this pistol is from Wilson,  it has everything Wilson quality such as aggressive grips, fiber optic sights, rails etc.  It is expensive but it's worth every penny. Many of Kimber's pistols come from the 1911 platform. Unlike the tactical look of the Wilson combat cqb, this one is flashy in terms of design, they come in many sizes and calibers but i recommend going for the Kimber Amethyst Ultra II.  It is a sub compact pistol chambers 9 millimeter or 45 acp with a 3 inch barrel, the color might put you off since it is an attempt to cater to women who want a girly gun. But it is reliable and durable. 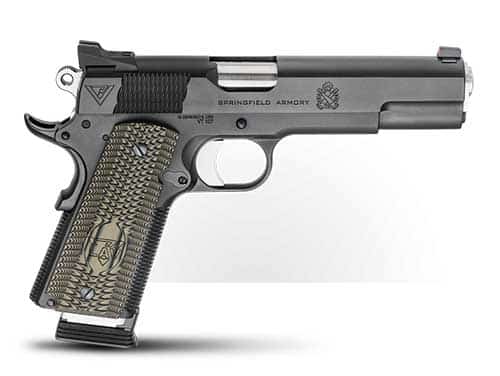 The Vickers tactical master class 1911 is an excellent firearm brought to you by Springfield Armory Wilson Combat and Larry Vickers.  The look screams tactical and is a badass gun and a discussion.  AS the name suggests it is designed for combat, every feature this gun is geared for modern combat including the gun, the trigger, the grip and color.

The combative design makes the master class stand out from other 1911s. The master class comes with certain upgrades that you need to pay to install when you buy any other gun.  When you buy the master class you get the upgraded trigger hammer and more right out of the box.  The Vickers elite blacked out rear sight is my favorite feature is it provides high visibility during both day and night, so it is a breeze to acquire a target. There are many things i want to say about the master class but long story short it is an excellent firearm and it is totally worth the money .

This is a little step down but the guns still perform flawlessly,  the ones i will show you below are amazing out of the box. The springfield armory emp is reliable as it should for its price,  many gun enthusiasts have reported owning this gun for many years and it still works like a charm, no malfunction whatsoever.  The 3 inch barrel is perfect and provides excellent precision and accuracy up to 15 yards, even if you shoot it rapidly.

The kimber warrior lives up to its name, if you feed a good ammo in magazines it will perform flawlessly. The accuracy is perfect even if it's not a match 911.  It is a gun that some law enforcement officers use so you know that it's worth the investment.

The Colt Delta Elite is an ideal pistol when you need one that can shoot both human and animal targets,  it chambers 10 millimeter cartridges which outperform most self-defense cartridges and semi-auto weapons.

The only downside is that the ammo is more expensive but this is a more powerful round. If you're not familiar with 10 millimeter rounds i will tell you right now that you will not have a good time with this pistol. If you did not like the recoil from the 45 acp or 40 Smith and Wesson.  For self defense purposes i recommend spending a little more money to get the rails so you can mount a laser or a light under its 5 inch barrel. 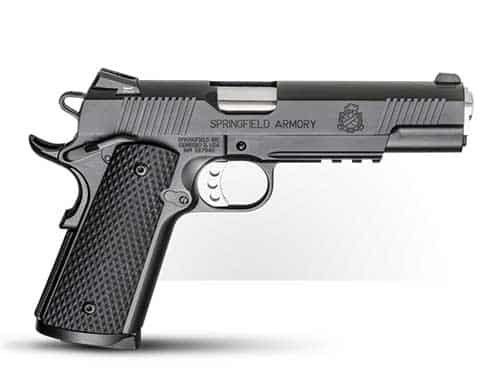 The Springfield Loaded operator is yet another sleek looking pistol, it has pretty much everything you need such as accessory rail, two-tone styling and night sights.  It works perfectly so you will not be disappointed.

The Sig Sauer Stx is an excellent 1911 option for duty carry, there are a few 1911s in the Sigs offering but nothing quite beats the stx.  It comes with a wide mag well, nitron stainless steel slide and also a custom burled maple grips.  It looks elegant and it works.

The guns in this range are affordable but they are more reliable than other pistols in their class, this is also the most popular category since most people just want a gun that shoots when you pull the trigger and does not care too much about the bells and whistles and tactical values. 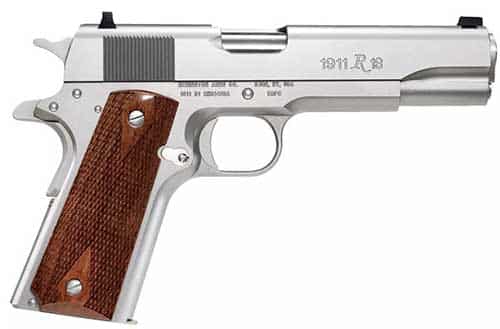 The Remington R1 Enhance is also a good pistol for two reasons.  For one, Remington is one of the first manufacturers of cold contact in the ramp up production so you are getting the 1911 build expertise and it shows in the R1.  Aother reason i like the R1 is because of the future proof potential, you can upgrade the R1 to what you want it to be,  that way you have a solid gun right out of the box and you have the option to upgrade it to suit your need better.

At this price range you start to see the quality beginning to fall off somewhat, it shows in the Ruger sr1911.  For one the trigger is a bit spongy, it lacks that crisp trigger you expect from more expensive models. Still i'm not complaining much considering its price, it works in a duty roll or as a concealed carry weapon

There are not many 1911s in this category that i can say are good,  this is for those who want to get a taste of what the 1911 has to offer but does not want to risk spending a fortune on one.  For this i recommend the Rock Island Armory 1911.

Designed by Armscor and manufactured in the Philippines, the Rock Island Armory 1911 does not look as flashy or tactical as the guns i've shown before. Despite its unassuming looks, it does its job well which is more that i could ask for considering its price. It shoots when you pull the trigger, it is reliable and reasonably accurate, so i can say with confidence that this is a safe first investment if you want to step into the world of 1911s.

Dakota Potts is a gunsmith, armorer and gun rights advocates. He enjoys learning about firearm history and technology. He has his own website at pottsprecision.com