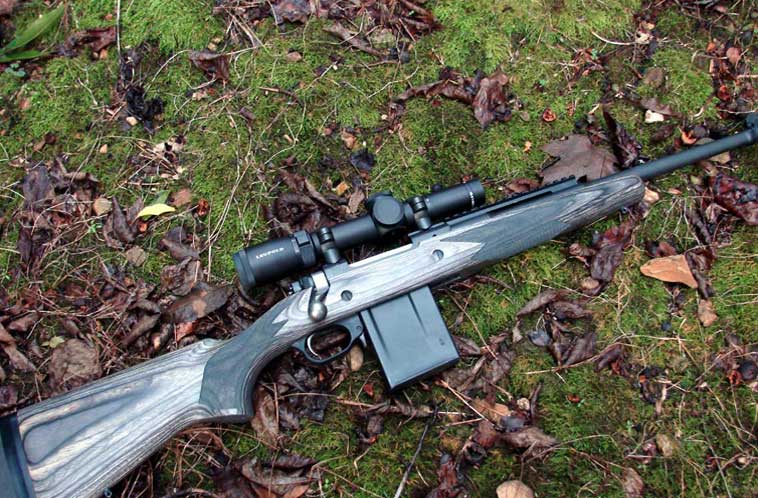 With the popularity of the AR-15 in today's gun market many people have begun using them as every day, every situation rifle. Despite the AR-15's popularity the “Scout Rifle” is still very popular with seasoned shooters.

The M1A makes for a good “Scout Rifle” with its light weight and versatility. When purchasing a “Scout Rifle” you must also take into account what kind of “Scout Scope” to use on your new rifle.

My Picks for Scout Scope

What is a Scout Rifle?

Though todays modern scout rifles are chambered in every kind of caliber. With the prevalence of the AR-15 it has become easier to have a “Scout Rifle” with varying calibers.

“Scouts” wanted a lightweight rifle, that was easy to carry with iron sights and a “Scout Scope.” A “Scout Rifle” should be able to accurately take out a man-sized target out to 450 meters while using iron sights and further distances with a mounted scope.

What is a scout Scope?

There is a specific definition of what a “Scout Scope” should be. The scope should be lightweight and low powered, allowing the shooter to shoot with both eyes open.

The scope should be mounted higher up than normal long-distance shooting rifle scopes. This allows for the use of back up iron sights as necessary.

WHAT DEFINES A SCOUT SCOPE

I would say there is one clear distinction between normal rifle scopes and and scout scopes which really makes a difference.

Scout scopes are mounted in front of the action on the barrel usually or on the housing of the rack so we wouldn't be able to mount a scout scope as a standard because we look at 9 centimeters you won't see anything, this works if it's strange but when we look at let's say on 40 centimeters, it looks long. So extended eye relief is the factor which defines the scouts scope. The rifle scopes which are made in a way that the scope is mounted in front of the action on the barrel, it's easier to put the ammunition in and when you're repeating your firearm, there is no way the casings which go out could hit the scope and so on these are just different rifles, this is the reason why they are mounted like this.

The most important thing here is that you would say the eye relief. With the normal scope we have an eye box which is roughly one centimetre or even less. Let's say that the RDF is 90 millimeters, if you go with the right to 80 millimeters you still see the image well but if you go to 75 you don't see it well and if you go to 95 or 100 millimeters, the image is not going to be good anymore at least you will see some shadows around it and some tunnel effect. With the scout scopes, this it's much better because they are much more forgiving, you can usually go a couple of centimeters in front of the optimum position or behind the optimum position and still have the edge. So in this aspect the eye box is much better than standar scopes.

What to Consider When Buying a Scout Scope

With a “Scout Rifle” being a rifle that is meant to be light weight and easy to carry around. The rifle should be a short compact rifle.

With these limits on what a “Scout Rifle” should be, there are also things to consider when purchasing a “Scout Scope.” The scope needs to be short in length and light weight. It needs to be able to be mounted in front of the action of the rifle, so the shorter the length of the scope the better this will be able to be accomplished. The shorter length of the scope allows for better eye relief as well.

The main thing to look for when purchasing a scope for your “Scout Rifle” is glass clarity, you want glass that is clear enough to be able to shoot out to longer distances as necessary. Scopes with clear glass will make this a lot easier.

A scope with the ability to adjust the parallax can make seeing targets at longer distances easier as well.

You want a scope that has crisp and clear windage and elevation adjustment turrets as well. Being able to hear and feel the clicks without taking your eye of the scope will make adjusting your scope a better experience.

Budget should be considered as well. Just because the scope is more expensive does not mean it is the best fit for what you are looking for. There are many different types of “Scout Scopes” that are budget friendly and still effective for the needs of most shooters.

Following I will touch on the best options that I have found out there for a good “Scout Scope.”

The Vortex Crossfire II is a second focal plane scope with a Dead-hold BDC reticle. It is a single piece tube constructed scope, that is waterproof, fog proof and shockproof. The Crossfire II is a nitrogen purged scope.

The Crossfire II has a fully coated, anti-reflective lens with a fast focus eye piece. The glass is clear and high quality.

The extended eye relief is unforgiving and allows for quick target acquisition and rapid follow up shots.

The turrets are capped and have MOA clicks, with up to 60 MOA elevation adjustment. The turrets are also able to be reset to zero after final sight in.

Vortex’s warranty is above any other on the market today. They offer a full lifetime no questions asked warranty. The warranty is also transferable, it goes with the scope, it does not only apply to the original purchaser. 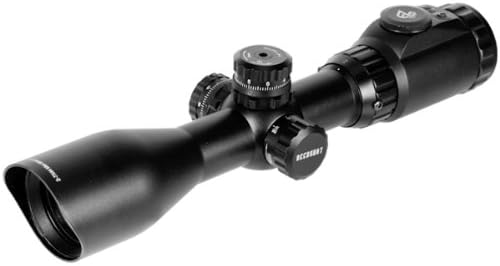 The UTG 2-7X44 scope is a second focal plane scope that has a 30mm one-piece tube. That is sealed, shockproof, fog proof, and waterproof. The 30mm tube allows for maximum eye relief and light transmission.

It has a tactical range estimating 6 mil-dot reticle, that is etched on the glass. The reticle is also able to be illuminated with 36 different colors.  The lens is coated with an emerald coat allowing for better light transmission.

The UTG 2-7X44 scope has an adjustable parallax adjustment, from 10 yards and up, allowing for finer tuning at all distances. 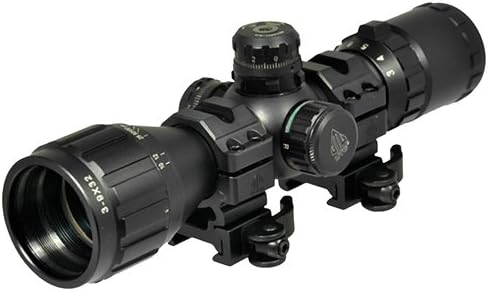 The UTG BugBuster scope is a second focal plane scope that has a 1-inch tube, that is nitrogen purged, shockproof, fog proof, and waterproof. It has an emerald coated lens with an etched mil-dot reticle. It also has red/green illumination.

The eye relief is accommodating, allowing for rapid target acquisition at all ranges.

The UTG Bugbuster scope has parallax adjustment from 3 yards to infinity.

The turrets are exposed and has ¼ MOA click adjustments. They are zero locking and resettable.

The UTG BugBuster comes with scope rings and a 2” sunshade as well. 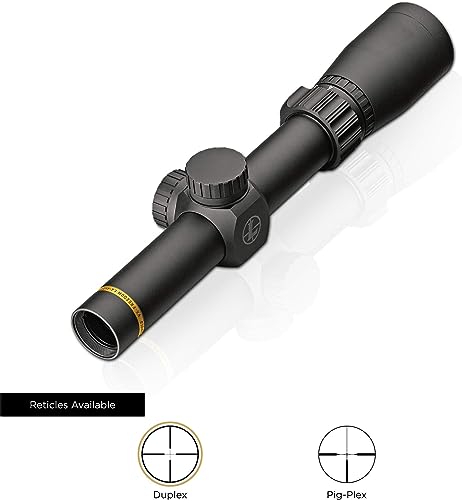 The Leupold VX Freedom 1.5-4X20 is a second focal plane scope with a 1-inch tube, that is nitrogen purged. It is waterproof, shockproof, and fog proof.

The glass is clear and crisp. The lens is scratch resistant and has duplex reticle. The lens also has Leupold’s twilight management system which allows for longer shooting times at low light levels.

The turrets are capped and have ¼ MOA click adjustments for windage and elevation. They are not locking or zero resetting turrets. The clicks are crisp and clear when adjusting.

The Burris Scout rifle scope is second focal plane scope with a 1-inch tube that is fixed power at 2.75 magnification. It is shockproof, waterproof and fog proof.

The short 20mm length allows for the scope to be mounted at different distances, make it easy to adjust the mounting position to allow for more eye relief for the shooter.

The glass is not as clear as the other options listed. The lens is multicoated and has a heavy plex reticle.

The Burris Scout Scope has set parallax and does not have any turrets. The fixed power allows for rapid target acquisition without the worry of magnification power adjustment. 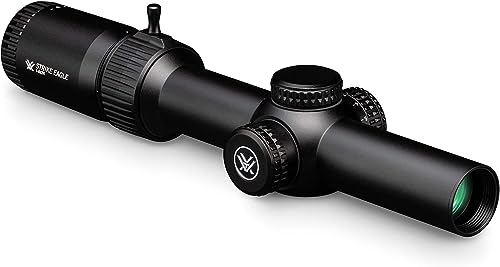 The Vortex Strike Eagle is a second focal plane scope with a 30mm tube, that is nitrogen purged, fog proof, shockproof, and waterproof.

The glass is clear and has an anti-reflective coating. The reticle is BDC3 reticle that can be illuminated as well. The BDC3 reticle allows for rapid target acquisition and hold overs on targets out to 650 yards.

There is no parallax adjustment with this scope. However, it does have a fast focus eye piece.

The turrets are capped and have ½ MOA click adjustments for both windage and elevation. They are not lockable or zero resetting turrets. The clicks are crisp and clear, making adjustments easier. 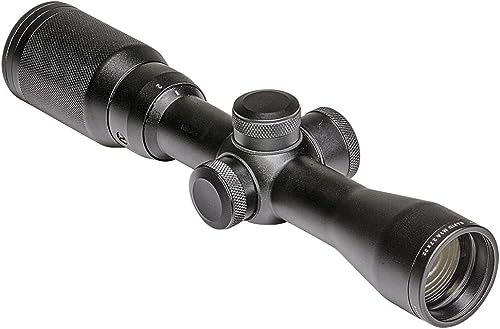 The Sightmark 2-7X32mm Scout Scope is nitrogen purged, shockproof, waterproof scope with a 1-inch tube. Eye relief for the Sightmark is 8 inches.

The glass is multi-coated with a TDR reticle designed for rifles with a 50 yard zero. The Sightmark Scout scope has an illuminated reticle.

The turrets are capped with ¼ MOA click windage and elevation adjustments. They are not lockable or zero resetting.

The eye piece has a rapid power rotation, the entire eye piece rotates, allowing the shooter to grab any part of the eye piece to adjust the magnification.

The Monstrum 1-4X20mm is a nitrogen charged scope that is fog proof and waterproof. It has a 1-inch tube. The eye relief is 3.5 to 3.8 inches.

The glass is clear with an etched on the glass black range finding reticle. The reticle can be illuminated in both red and green.

The turrets are capped with ½ MOA click elevation and windage adjustments. They are also zero resetting and locking.

The Monstrum 1-4X20mm scope has a detachable throw lever, that allows for easy magnification adjustments. It also comes with included scope rings. 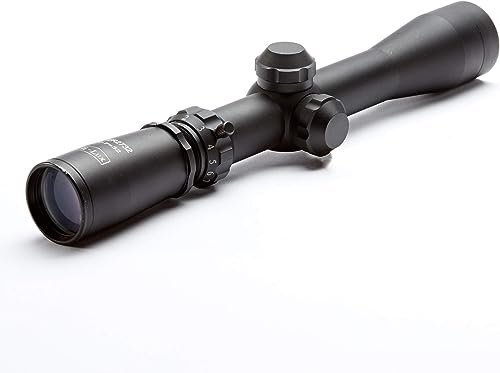 The Hi-Luz 2-7X32mm scope is a 1-inch tube scope with a scout rifle .308 BDC reticle, that provides up to 13 inches of eye relief. It is designed to be mounted to the barrel well in front of the action of the rifle.

While the glass is not as clear as other brands, it is still clear enough the proposed usage.

The LER scout rifle has capped turrets with ¼ MOA click windage and elevation adjustments. They are not locking or zero resetting turrets. 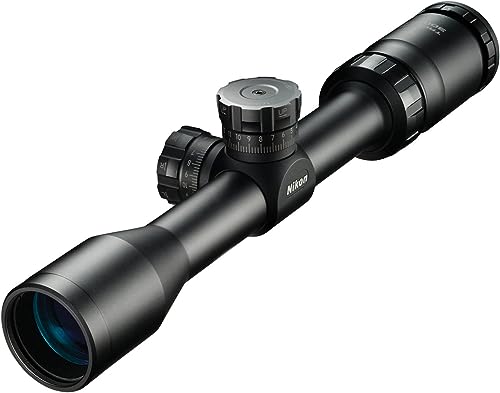 The Nikon P-Tactical 2-7X32mm matte BDC supersub is a 1-inch tube scope with a BDC Supersub reticle designed for the AR-15 in .223 Remington, shooting a 55-grain bullet. The reticle has open circle aiming point with additional hash marks, for shots from 100 to 600 yards.

The glass is a nitrogen purged, multi-coated optic, that is shockproof, waterproof, and fog proof. The glass is crisp and clear.

As you can see there are many good choices for a “Scout Scope.” Not every scope will meet your personal needs, and each individual person should decide on what scope is best for them personally. Your needs for features on a scope maybe different then your friends and their scope may not be what is best for you to purchase.

As with any scope you should familiarize yourself with all the attributes of the scope you choose and become proficient in using it.

Jeramy Smith is a writer, avid hunter, outdoor enthusiast, and firearms enthusiast. He grew up in both Virginia Beach, Virginia and rural Michigan. He has soaked up as much information as possible about everything firearms related. He currently builds firearms and spends his days at the range and writing. He currently lives in rural central Michigan, with his wife, 2 daughters, and 2 stepchildren. 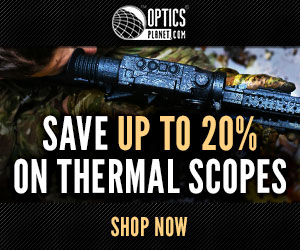